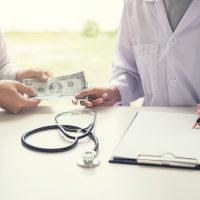 Prosecution for healthcare fraud can start with something as simple as an accusation by someone at your office who thinks improper billing practices are going on. This can spur an investigation by a federal agency like Health and Human Services’ Office of Inspector General or the FBI, or the Bureau of Medi-Cal Fraud and Elder Abuse of the California DOJ, and before you know it, the U.S. Department of Justice has launched steps to prosecute your healthcare practice for defrauding Medicare or Medicaid (Medi-Cal) for some form of healthcare fraud, such as upcoding, unbundling, billing for services not performed, performing medically unnecessary services, medical equipment fraud, and more.
Before any federal healthcare fraud prosecution begins, several things will happen over the course of days, weeks, or months. Here we discuss the many stages of a federal healthcare prosecution. If your office is under investigation for healthcare fraud or if an indictment has been issued against you, don’t hesitate to contact an experienced healthcare fraud attorney for practical advice and staunch representation. In Los Angeles and Southern California, call the Law Offices of Art Kalantar at 310-773-0001 for immediate assistance.

Healthcare fraud investigations can go on for weeks or months before charges are ever filed. During this time, government investigators might interview employees and others connected to the healthcare practice. However, any person has a right to refuse to speak with the investigators or agents of a law enforcement agency and consult an attorney first. Investigators might execute a search warrant to search files and records on-site, up to and including seizing computers, laptops and other devices that could contain sensitive or potentially incriminating information. You might also receive a subpoena ordering you to testify or turn over records to a grand jury. It is important to respond timely to any such subpoena or request, including instituting a “legal hold” on your records per the advice of your attorney.
The government might also send you a “target letter” informing you that you are the subject of an investigation or grand jury proceeding. If you receive such a letter, you can expect to be arrested and prosecuted at some future date. Whether your first notice of a possible prosecution is a target letter, search warrant, or informal communications from federal agents, you should immediately contact a healthcare fraud defense lawyer to protect your rights and position you for the best outcome in your case. Your attorney will contact the prosecutors and may negotiate a self-surrender to avoid an arrest on the indictment.

If the prosecutors in charge of your case want to prosecute you, they will present their case to a grand jury (for felony charges) and request an indictment. The grand jury hears witnesses, reviews evidence, listens to arguments from the prosecutor, and decides whether the prosecutor has produced enough evidence to charge you with a crime. You might have no involvement with the grand jury unless you are called to testify; you do not get to argue your case to the grand jury to forestall charges at this stage, although your attorney could intervene with the prosecutor and try to convince them not to file charges or influence what charges get filed.

If indicted, you’ll be arrested by federal agents or be allowed to self-surrender, if prosecutors agree through your attorney. Then, you will be scheduled for an initial hearing and arraignment. This hearing is usually held the same day as the arrest or the next day. You’ll be brought before a magistrate judge and informed of your rights and the charges against you. You’ll enter a plea at this time (usually Not Guilty), and the judge will decide whether to grant pre-trial release or hold you without bail.

Pre-trial release is important for you to assist in your defense and live your life while the charges are pending. The judge will hold a hearing regarding your employment responsibilities, community ties, family relationships, criminal record, the amounts of money involved, any physical harm or death involved in the case, and whether you pose a flight risk or danger to the community. Pre-trial release is granted in most healthcare fraud prosecutions, but you’ll need excellent representation from an experienced and successful healthcare fraud defense attorney to help ensure this. You are entitled to be represented by a lawyer of your choosing at this hearing and all subsequent stages of the prosecution.

Depending on the strength of the prosecutor’s case and the potential consequences of a conviction, it might be in your best interest to strike a deal with the prosecutor that avoids a trial and a possible worse sentence. To negotiate a plea bargain, you must have actually committed the crime and admit to it in open court. You will be sentenced as the judge sees fit, but the prosecution can recommend a sentence and agree not to seek enhancements as part of the plea bargain.

If moving on toward trial, a preliminary hearing will be held. Here, the prosecutor must show it has enough evidence to charge the defendant. This hearing must be held within 14 days of the arrest if the defendant is in jail or within 21 days if the defendant has been granted pre-trial release. During the hearing, the judge will hear witnesses and evidence, and your attorney has the opportunity to cross-examine the government’s witnesses. The judge can hear evidence to establish probable cause that a crime was committed by the defendant, even if that evidence would be inadmissible at trial. The judge can find probable cause to try the defendant or dismiss the charges.

Your attorney might make several motions to the court before the trial ever begins. These can include, for example, motions to dismiss one or more charges against you or to dismiss the entire case; motions to suppress evidence that should not be admitted; and a motion to change venue, i.e., the county or state where the trial will be held.

At trial, each side has the opportunity to present witnesses and other evidence, cross-examine the other side’s witnesses and make appropriate objections to evidence and testimony offered. The prosecution goes first, followed by the defense. Next comes closing arguments by both sides, followed by jury instructions and deliberations. The jury then returns a verdict of guilty or not guilty.

Even if the jury voted to convict, your attorney can still make motions asking for an acquittal or new trial, or asking the judge to set aside or correct a sentence. These motions must be supported by strong legal arguments based on the facts of the case.

If convicted at trial, you’ll return to court months after the guilty verdict for sentencing. The judge will sentence you according to federal sentencing guidelines, the information provided in a presentence report, victim statements, defendant statements, and aggravating or mitigating factors brought out by the prosecutor and your defense attorney.

If convicted, you have the option of appealing your conviction to the Circuit Court. An appellate court can reverse a conviction, modify a sentence, or order a new trial. An appeal must be based on errors that were committed during the trial. Your attorney will discuss with you whether it appears worthwhile to pursue an appeal in your case.