How to Terminate a Healthcare Employment Contract 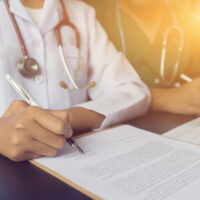 Termination of a physician’s employment or contractor arrangement can be tricky.  Employees and contractors in the healthcare industry are protected by California employment law, and all sides must additionally adhere to the myriad state and federal healthcare regulations.  Below we provide a brief overview of some of the provisions that should be considered in physician employment contracts or contractor agreements, and that will dictate what happens upon the termination of employment.  Contact a knowledgeable California healthcare employment attorney with any questions or for help with a healthcare-related dispute.

Physician contracts will typically include a set term of years for which the physician will be employed, typically involving an initial term of one to five years followed by proposed renewal terms.  There should be a term in the contract that provides for early termination, however, and the crafting of that clause can be vital to having a beneficial employment contract.  Grounds for early termination may be either “for-cause” or “at-will” (meaning without cause).

California is an at-will state, meaning employers can terminate employees and contractors without cause, as long as at-will employment is not prohibited by contract, and the employer is not doing so for illegal reasons, such as racial discrimination.  At-will termination typically has a notice period, often 60 days, while for-cause termination can be immediate but may provide for a cure period.

If the contract provides for for-cause termination, then the contract should define what “cause” may include.  Cause can be, for example, loss of license, loss of hospital privileges, or loss of participation status with third-party payers, as well as more general misconduct such as gross negligence, willful misconduct, or material breach of contract.

Physician contracts can include a variety of provisions that are triggered in the event of employment termination.  Contracts should make explicit who will be responsible for medical malpractice claims that arise after a physician’s employment has been terminated.  Doctors and hospitals will typically have insurance coverage that ends at the termination of employment, but if a patient brings a claim after the doctor has left regarding treatment that happened before the doctor’s termination, the parties must decide whose malpractice insurance would cover such a claim.  Both parties may have such “tail coverage” in their policies, but that still leaves the question of whose insurance will govern and who pays the premiums.

The contract may also include restrictive covenants, also known as non-compete or non-competition clauses.  These clauses purport to prevent a physician from leaving your hospital to work for one of your competitors.  Even if explicitly included in an employment contract, they are often unenforceable under California law.  California law strongly disfavors such restrictive covenants as being anti-competitive and unfair to workers.

However, a contract can prevent a terminated physician from using proprietary or trade secret information to benefit themselves upon leaving a practice, such as by misappropriating a patient list or list of referral sources for their own benefit.  Contracts can also restrict a physician from soliciting existing patients to come to their new practice.

Departing doctors generally also may not solicit employees such as office managers, nurses, technicians, and other employees to leave a hospital or medical practice with them.  The doctor can announce their move and must then leave the employees to initiate any further contact.

If you’re a California healthcare provider who needs assistance with matters pertaining to employment contracts, contractor disputes, or any other issue of healthcare law, get dedicated and effective help by contacting a talented Los Angeles healthcare lawyer at the Law Offices of Art Kalantar for a free consultation in Los Angeles or statewide at 310-773-0001.